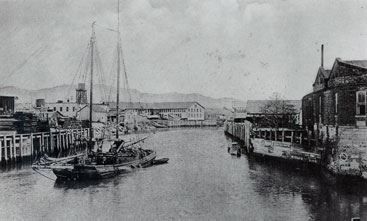 This brief history of the City of Napa and the accompanying photos are provided courtesy of the Napa County Historical Society website.

Nathan Coombs laid out the original town site of Napa City in 1847. The initial survey included the land lying between what is now Brown Street and the Napa River, extending 600 yards from Napa Creek to the steamboat landing. The spot was a natural location for the town since it was at the uppermost point of river navigation, necessitating a change in transportation mode and thus a natural trade and transportation center for travelers and agricultural, commercial and industrial goods.

The new town harbored an assortment of people from Europe and Asia, including native Indians, who established themselves in the area. Gold miners spent their winters in Napa; prices reflected the abundant supply of gold.

Napa’s first building was a saloon on the corner of Third Street near the river, followed by a general store at the foot of Main Street. Other small temporary buildings began to appear in the fall of 1848, many made of canvas or Napa Valley lumber.

The river ferry marked the beginnings of a progression of boat, stage and rail service that greatly influenced the growth of Napa. The first steamboat navigated the Napa River from San Francisco in 1850. Perishable freight and passenger traffic were carried by steamboats until the railroad was established in 1868. A series of steamboats connected Napa with San Francisco between 1850 and 1870. The Amelia, a 147-foot vessel was the pride of the Napa River.

The most important transportation development came in the 1860s-the Napa Valley Railroad. The railroad was mainly a result of the efforts of Sam Brannan to support his new Calistoga Hot Springs Resort. Napa Valley Farmers and Napa townspeople opposed the railroad as an attempt to bypass Napa. In fact, the railroad provided very favorable to Napa as it brought more people into the area, increased land value and drew greater attention to Napa. Napa grew and soon controlled trade of the northern county.

The formation of a county government system in 1850 brought about the building of the first courthouse at the corner of Coombs and Second Streets. The City was slowly becoming established: by 1854 the town had forty buildings, mostly primitive and made of wood. The streets were dirt. The town was busy, with a theater, a company of minstrels and musicians, a jockey club and other urban offerings. As the county’s population approached 7,000 by the early 1870s, plans were prepared for the third courthouse, which is still in use today.

Several schools and a library system were established in Napa. A weekly newspaper, the Napa Register, appeared in 1856 and still serves the community. Gas and electrical service and a telegraph line were brought in during the 1850s and 1860s."

From Napa County: An Historical Overview by Norton L. King, 1967. 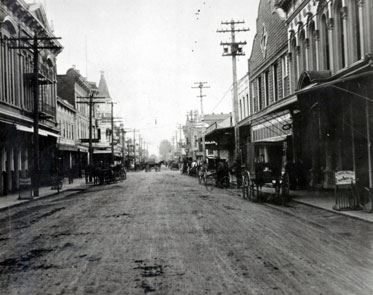 The undated photo here appears to have been taken in the late 1800s. It shows Main Street looking south toward First Street. At left can be seen the Napa Valley Opera House, and the building with the conical spire is the Winship Building. Both structures remain in use today.

Here is an excerpt from a book published in 1891 titled: Memorial And Biographical History Of Northern California Napa, formerly styled Napa City, is the county town and leading city of Napa County, a place of great prosperity and extensive trade, and a favorite residence for retired wealth.

The original town plat of Napa City was planted in beans in 1847, which was the first evidence of civilization in that locality. There was then not a house in the county except a few adobes, occupied by Mexicans and a few hardy American pioneers. The first mention of the place in a newspaper was a statement in 1848 that the ship Amalek Adhel had passed up the Napa river and found plenty of water to a certain point, and that beyond that was the embarcadero de Napa. Early in May, 1848, the first building was erected, which formed the nucleus around which the present city has grown. It was one and half stories high, 18 by 24 feet in size, and was built by Harrison Pierce for a saloon. This building was still standing a very few years ago.

The town site was surveyed and laid out by of the late Hon. Nathan Coombs in the spring 1848, the limits including only the land lying between Brown street and the river, and extending 600 yards from Napa street to the steamboat landing. During that year John Trubody mowed almost the entire plat, which was covered with a rank growth of wild oats, and sold the hay to the Government. The gold discovery temporarily checked settlement here; but after the first reverberation improvements began and were continued until a beautiful city was the result.

In Napa there are two tanneries, one of them the largest wool-pulling and tanning establishment on the Pacific Coast. It has drain-tile and brick-works, a glue factory, a busy fruit-packing establishment and wineries that rank in size and reputation with the best in the State. The Napa woolen-mill has a wide reputation for making fine fabrics. A company has also lately gone largely into the business of grape drying and shipping. It has also a large sash and door factory, etc., etc., has splendid water-works and no debt.

Extracted from Memorial and Biographical History of Northern California. Illustrated, Containing a History of this Important Section of the Pacific Coast from the Earliest Period of its Occupancy to the Present Time, together with Glimpses of its Prospective Future; Full-Page Steel Portraits of its most Eminent Men, and Biographical Mention of many of its Pioneers and also of Prominent Citizens of To-day.