Historic Sites in the City of Napa

The City of Napa is home to a bounty of beautiful Victorian-era homes and commercial buildings. Along our streets can be found places where history was made.

In many ways, Napa's historical sites reflect the history of California itself. The Bear Flag revolt that led to the state becoming part of the U.S began just a few miles to the north in 1846. The City was laid out by Nathan Coombs in 1848, and grew tremendously through the gold rush of 1849 and the later silver and mercury mining heydays.

Today you can walk the same streets where 49ers, Chinese laborers, lumber barons and early wine making pioneers began building the City of Napa more than 150 years ago, and you will find many treasured historic structures still in use. 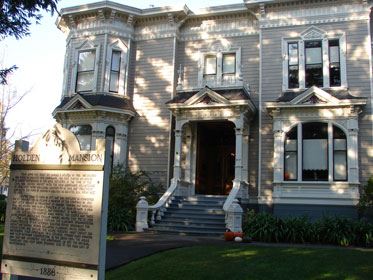 On the northwest corner of Pine and Franklin Streets; built in 1886.

Located at 101 South Coombs Street; founded in 1869; birthplace of "Nappa leather," a name that was copied by many other non-Napa leather makers. Sawyer would grow to be the largest tannery west of the Mississippi.

In 1915, Jensen and Pridham invented the loudspeaker in their workshop in Napa. They would go on to found Magnavox.

Birthplace of one of Napa Valley's great wine names and perhaps the first commercial wine making in the Valley.

On the southwest corner of Main and Clinton Streets (1245 Main) stands this graceful stone structure near Napa's former Chinatown; now home to the Vintner's Collective. (Damaged in the 2014 earthquake.)

This historic treasure was built in 1879 and is located at 1030 Main Street. See more Opera House History on the Napa Valley Opera House website.

Between Third and Second Streets. (Damaged in the 2014 earthquake.)

Built in 1901; the oldest library building in California still being used as a library. Home to the Napa County Historical Society. (Damaged in the 2014 earthquake.)

Built in 1903 as a Noyes family home, now home to the local offices of the Wine Spectator. Located at:

Now home to the Jarvis Conservatory

Most recently Napa Pipe, a critical supply of ocean-going vessels were built here during WW2.