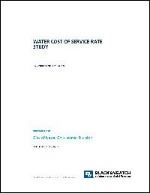 The City of Napa proposed a rate increase to water service charges for all customer classes, as detailed in Proposed Rate Sheets (PDF). The 2017 Water Cost of Service Rate Study (PDF) demonstrated the need to include a bimonthly fixed service charge for all customer classes based on their service (meter) size to ensure stability of the water system. For water quantity charges, a revised three-tier pricing system was proposed for single-family residential customers, and revised uniform quantity charges were proposed for multi-family residential, commercial, and irrigation customers. Customers in pumped zones would see an increase in their elevation surcharge. Adjustments to bimonthly charges for standby fire services were also proposed. The Water RateShare discount for eligible low-income customers would be increased to $25 per bimonthly bill from the previous $4.75.

In accordance with Prop 218, water customers and property owners were mailed a Special Notice of Public Hearing (PDF) regarding the proposed rate changes on September 22, 2017, beginning a 45-day comment period in advance of the Public Hearing of adoption held at City Hall, 955 School Street, on November 7, 2017. A protest form with submittal instructions was included with that notice. As the number of written protests received did not approach a majority of parcels subject to the proposed water rates, the new rates were adopted by City Council at the November 7 hearing.

The new rates became effective with each customer's first billing period that began December 1, 2017 or later. The first bills reflecting the new rates would not be received by customers until February and March 2018. Scheduled annual increases then occur October 1 each year through 2021.

To learn more about the impact of and justification for the new rates, water customers were invited to:

Water rates that had been in effect since October 2011 included a fixed service charge for single-family residential customers, along with tiered quantity charges. Other customer classes paid uniform quantity charges only, with no fixed service charge. Those rates had resulted from a 2011 Water Cost of Service Rate Analysis Study and a 2011 Prop 218/City Council Rate Adoption Process similar to 2017.

The rate schedule included five years of fixed rate increases, but was followed by no increase from late 2015 through 2017. During those last three years the rates did not recover the actual cost to provide water service, and the rates needed to be restructured to more appropriately reflect water system costs that do not vary with the volume of water provided.